An Airbnb host has been banned from the platform after being accused of unlawful race discrimination.

The host made it clear to at least two prospective guests that blacks were not welcome to apply to stay at her apartment.

A Melbourne teenager says a host named Helen rejected her application to book an apartment with her sister from November 28 to 30 because of the colour of her skin.

Helen told the teenager, “Hi, thank you so much! If you are black, please forgive us for not receiving you!”

“Give me my money back right now cause I am black.

“I do not appreciate this at all! This is pure RACISM. In a time like today especially, I’ll be sure to report you immediately.

“For someone to be posting on a major platform such as this, such discrimination is not acceptable.”

The teenager then posted the exchange on social media.

Helen tried to defend herself, claiming she was following strict instructions from her building manager.

“The whole building is like this, and the building management gave us an ultimatum.

“I’m not discriminating against anyone, we really don’t have the ability to deal with this, because it’s happened more than once.”

Incredibly, she then accused the teen of being disrespectful.

“Respect is not hard, it comes from everyone’s upbringing, and I don’t want to do that.”

It turns out this is not the first time Helen has rejected people of colour.

Other Twitter users also accused Helen of race discrimination, with one accusing the Airbnb host of telling her, “I’m sorry we don’t take blacks”. 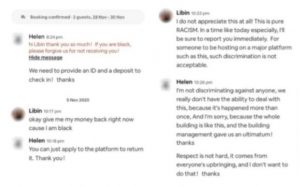 “The law says it is unlawful to treat someone differently, or unfairly, because of their race, skin colour, or social or ethnic origin,” he said.

“This applies in employment, and in the provision of goods and services, and also in accommodation.

“Helen’s conduct is almost certainly in breach of anti-discrimination laws, and the Airbnb applicant will have a strong case.”

‘No place in our community’

Airbnb acted quickly when it became aware of the exchange between Helen and the teenager.

Head of Public Policy for Australia, Derek Nolan, confirmed it had removed Helen from the platform and that the company will “continue to investigate the matter”.

In a statement he said:

“Airbnb’s mission is to create a world where everyone can belong anywhere.

“This is something we care deeply about and are absolutely committed to.

“Discrimination is unacceptable and has no place in our community.

“We have removed a host and the listing in question and will continue to investigate the matter.

“We enforce a strict non-discrimination policy and under our Open Doors initiative, if a guest feels they have been discriminated against, we will provide personalised support to ensure they find a place to stay.”

Crust pizza in court accused of discriminating against overseas workers

The operators of a Crust Pizza outlet are facing court, accused of discriminating against a…