A Christian College has been referred to the Queensland Human Rights Commission over an anti-LGBTIQ enrolment contract.

Lawyer Matilda Alexander from the Queensland LGBTIQ Legal Centre (pictured) has filed five complaints in the QHRC on behalf of a number of parents and former students.

They claim the enrolment contract unlawfully discriminated against them based on their sexuality and their gender identity.

“When that contract was sent out, we are alleging that that was direct and indirect discrimination,” Alexander told ABC Radio.

“Nothing has changed since then that will ensure that Citipointe, or any other school, do not introduce another contract like this or enact another policy to impose upon students.”

At the start of the year, Citipointe Christian College in Brisbane demanded parents sign the new enrolment contract.

The contract stated that the school would only enroll students based on their “biological sex”.

It also included a “statement of faith” that described homosexual acts as “immoral” and “offensive to God”. It even compared them to acts of bestiality, incest, and also paedophilia.

The contract sparked widespread community outrage and led to the resignation of principal Brian Mulheran.

The school subsequently withdrew the contract. 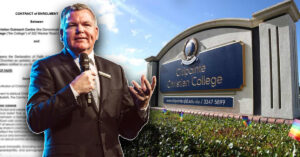 Helen Clapham-Burns worked for more than a decade as a teacher at Citipointe College before resigning over the contract.

She is also a parent of a gay daughter who previously attended the school.

“If I couldn’t sign it as a parent then I certainly wasn’t going to be able to continue to work there if that was the enrolment contract that was going to stay,” she told ABC Radio.

“I had to put in my resignation on the Monday and I had to find a new school for my son who was just starting Year 11. We didn’t get any notice, there was no consultation with parents, the staff didn’t know this letter was going out.”

Queensland’s Anti-Discrimination laws protect students and staff from discrimination based on their sexuality and gender identity.

However, it also protects people based on their religious belief or activity.

“We want to send a strong signal to schools and the community that this sort of behaviour is not okay and does not reach community standards.  So we want to ask for a LGBTIQ policy or procedure to ensure that this kind of treatment doesn’t happen again,” she told ABC Radio.

Alexander refused to say if her clients are also seeking monetary compensation in addition to the inclusion policy.

The QHRC will facilitate conciliation sessions between the parties in an attempt to settle the matters.

If that fails, the claims will be referred to the Queensland Civil and Administrative Tribunal for determination.

Citipointe sent out the contract just as the Morrison government was trying to pass its controversial Religious Discrimination legislation.

It ultimately failed after a number of MPs crossed the floor when Morrison refused to add protections for LGBTIQ students.

“I believe that we as Australians should have religious freedom but not at the expense of our most vulnerable students,” Clapham-Burns said.

“We know that they are not safe,  they are killing themselves. And on top of that, Christian queer kids think they’re going to hell and are told that information. We need to have safe parameters for these children to feel loved, feel protected, as they work out who they are as they become young adults.”

Meanwhile, Alexander said the legal service expects to file more complaints in coming weeks and says it has been in contact with over 20 people about the issue.

Ban on singlets at Queensland surf clubs is unlawful discrimination

A ban on singlets at a number of Queensland surf clubs is unlawful discrimination, according…