The Collingwood Football Club has a problem with systemic racism, according to an independent review.

The club commissioned the review, which was leaked to the media today.

The report described Collingwood’s history with racism as “distinct and egregious”.

It also said the the club’s leadership, “particularly its board”, needed to lead structural change.

The review also noted a culture of individuals “having an unhealthy degree of influence over Club culture”.

The club has had the report for over a month, but it was only leaked today.

While not named, long-time high profile club president Eddie McGuire announced days after receiving the review that he will step down at the end of the 2021 season. 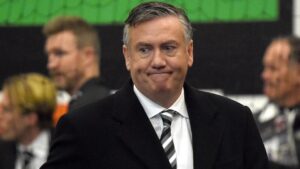 Collingwood President Eddie McGuire will stand down at the end of the 2021 season.

Professor Larissa Behrendt , a director of the Jumbunna Institute for Indigenous Education and Research at UTS, conducted the “Do Better” review.

The pair looked at evidence on the public record, in addition to interviewing staff, players, ex-players and supporters.

The review made 18 recommendations, including an audit of the Board to ensure the “personal views” of its members are “consistent with the values of the Club”.

As a result, it can’t deal with allegations in the same way it can with other issues.

Sexual misconduct, drug-taking or poor behaviour in public are all penalised by the club, however, racism is not held to the same standards.

The review came about as a result of former player Heritier Lumumba speaking out about racism.

He said a lack of “anti-racist policies” allowed a culture of discrimination to fester within the Collingwood Football Club, leading to racist jokes and comments.

He claimed other players would refer to him as “chimp”.

There has been a mixed reaction to the AFL's gender neutral restrooms, with some praising…