A creepy Coles manager has lost his unfair dismissal claim after being sacked over 39 complaints of sexual harassment.

In addition, young female staff made bullying complaints against the manager.

The Fair Work Commission criticised the man for his “obsessive” behaviour.

For example, standing “uncomfortably close” to young female staff, touching them inappropriately, and whispering “good evening” into their ears.

Peter Angelakos started working for the supermarket chain in 2009.

In May 2017, Coles promoted him to duty manager at the Moranbah store in Queensland.

Two female employees aged 17 and 23 initially made complaints that the 52-year-old had acted inappropriately towards them.

The 17-year-old employee described an incident during which Angelakos placed his hand on her back and whispered, “Good evening” as she worked at a register.

The Commission heard he “tested the waters” the previous day by touching the employee “inappropriately and unnecessarily on the small of her back for a period of approximately five seconds”, causing her to feel “extremely uncomfortable”.’

Additionally, the employee accused him of “often” standing “very close”, “approximately 10-15 centimetres”, and repeatedly touching her shoulder or arm when speaking to her.

Another 17-year-old worker told the Commission Angelakos would “usually stand in very close physical proximity, within roughly 10-15 centimetres of her face”.

Furthermore, the 23-year-old employee often had to gesture to Angelakos to not get too close.

“We’ve all got personal space. I have my bubble. You have yours,” she told him.

The same employee said Angelakos made creepy comments about her looks, describing her tattoos and piercings as “pretty”.

Additionally, he offered her flowers, and repeatedly requested to become friends on Facebook.

Another employee, aged in her mid-20s, alleged Angelakos stood “within 10 centimetres” of her face, and stood behind her when she was stacking shelves. 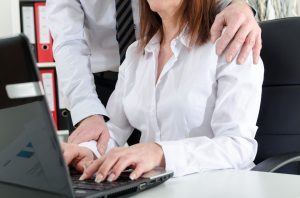 ‘I’m only allowed to touch them on the forearm’

“I already know I’m only allowed to touch them on the forearm,” Angelakos responded.

The manager told the Commission his response “disturbed” her and “set off alarm bells”. Angelakos denied the allegations and argued that another manager had orchestrated a “conspiracy” of complaints against him.

Fair Work Commissioner Jennifer Hunt didn’t agree, upholding most of the 39 complaints, including all of the sexual harassment breaches.

“When the complaints are compiled, the sheer volume is concerning.

“Having regard to the numerous times Mr Angelakos said ‘good evening’ (to the 17-year-old) it is pestering and unnecessary to approach (her) again, while leaning towards her ear to say it again.

“I accept that it occurred, and consider it to be odd, obsessive conduct.”

She added it was “concerning that a 52-year-old man in a senior position in the store did not recognise the inappropriateness of repeatedly standing so close to a 17-year-old junior employee”.

Ms Hunt said Angelakos’ “interest” in the 23-year-old employee’s attractiveness and ongoing interest in the third employee, “bordering on, in my view, an obsession, also was unacceptable”.

Ms Hunt concluded there “are at least two serious matters that constitute a valid reason for the dismissal”.

Therefore, she found the dismissal neither harsh, unjust or unreasonable.

“No reasonable person would consider his conduct appropriate, especially considering the age of the young female employees,” he said.

“No one should have to put up with this sort of behaviour when they go to work.

“In this case, with 39 separate complaints made by multiple employees, it is clear that this is not a one off misjudgement, but rather, a pattern of unlawful conduct.”

Discrimination Claims has won more than $60,000 compensation for a bullied bisexual banker subjected to…