One staff member said they felt deeply offended, with another saying it had cemented their decision to quit their job.

The revelations are contained in emails from staff to their superiors obtained by The Sydney Morning Herald and The Age.

The department had recently held a morning tea to celebrate International Day Against Homophobia, Biphobia, Intersexism and Transphobia (IDAHOBIT).

Staff wore rainbow clothing and allay pins on the day to show support for their LGBTIQ colleagues.

Defence leadership promoted the day and encouraged staff to organise events such as morning teas.

But in May, Dutton told Defence Force Chief Angus Campbell to issue a memo banning such events. He added he will never tolerate sexuality discrimination, however, he will not pursue a “woke agenda” either. 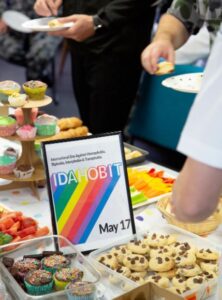 The SMH and The Age obtained the internal emails through a Freedom of Information request.

One senior official told another that one of her staff members felt “incredibly distressed by this message”.

Another described feeling “slightly disturbed” by the order.

A third said they felt “immediate disappointment and shame” and the order “further concretes my decision to leave Defence”. The person said it was a “terrible reaction that is damaging on many levels”.

“Firstly to the LGBTIQ+ community and in particular members of Defence it must have been horrible to have a day that is meant to promote inclusivity and compassion singled out and deemed unnecessary.

“In terms of Defence’s reputation I think it is a horrible reflection and not in keeping with the Defence values.

“It is tone deaf to current issues within not only the Defence community but the broader Australian community.”

One of the internal ADF emails obtained by The SMH and The Age.

The Community and Public Sector Union wrote to General Campbell in June.

It described the order and Dutton’s comments as “hurtful to many Defence LGBTI+ employees and their many allies”.

An ADF spokesperson told The SMH and The Age it is “continually taking steps to enhance policy to support all members of the Defence community and supports a number of days of significance that relate to national commemorations, culture, workforce and families”.

“Defence is committed to building a capable and diverse workforce that reflects the community we serve.”

Most Australian flight attendants report experiencing sexually harassed on the job, according to a new…

Drag Queen accuses nightclub of discrimination after being refused entry