Two thirds of Australian flight attendants have been sexually harassed on the job, according to a new survey released by the Transport Workers Union.

The report found that half of cabin crew were harassed more than four times, and one in five said it happened more than 10 times.

Four out of five workers said the harassment came from co-workers, and three in five said it came from passengers.

One worker said they were harassed every day, and sometimes on every flight.

Workers detailed incidents including passengers exposing themselves and asking for oral sex, touching their genitalia and asking personal questions.

Others said they had been pinned down and assaulted, or had been touched on their groin or buttocks by passengers, and many had received derogatory comments about their perceived sexual orientation.

Most don’t report harassment because they fear losing their job

The survey found that 69 percent of those who had been harassed didn’t report it, because they feared they would not be taken seriously, or would risk losing their job.

Of those that did report it, 84 percent said they weren’t happy with the outcome.

The disturbing findings were released at the launch of the #CabinCrewToo campaign.

TWU national secretary Michael Kaine said the stories exposed an “industry in crisis” where harassment was rampant and people were too afraid to speak up.

“These incidents are shocking, they’re sad, and they’re unacceptable,” he said.

The survey involved 400 cabin crew who worked for all of Australia’s major airlines. 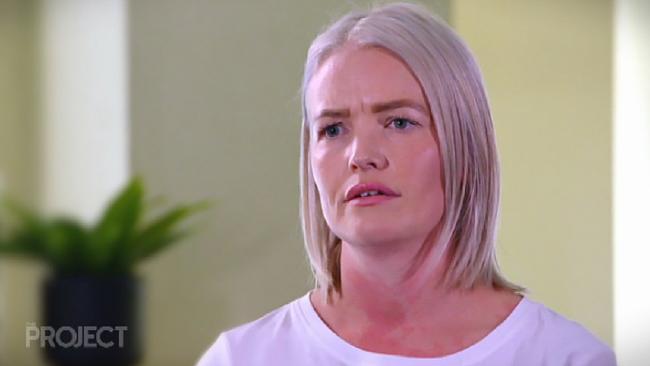 She described how her on-board manager would blow on her neck, slap her backside and make inappropriate comments.

She claims that despite asking to not be rostered on with the man, the airline kept putting them on the same flights.

“I had this naive idea in my head that I was going to get my way.  Because why shouldn’t I?  I was in the right,” she said.

In the end, Ms Rowland quit her job in frustration at how her complaint was handled.

Sexual harassment is against the law – even for passengers

“Passengers who harass flight attendants are not only grubs, they’re also breaking the law,” he said.

“Everybody has a right to go to work and not be subjected to this sort of vile conduct.

“Sexual harassment can make a person’s life miserable, and it can also lead to serious issues like anxiety, depression and even post traumatic stress disorder.

“This survey makes it clear that the airlines need to do more to eliminate sexual harassment, whether it be from staff or passengers.”

If you have been subjected to sexual harassment, you may be entitled to compensation.

PM urged to protect gay kids and teachers from discrimination

As schools start back this week, advocacy groups are calling on Prime Minister Scott Morrison…

To this day, he remains one of the greatest and most-loved heroes in movie history,…