A former Hertz employee is suing the hire car company for sexual harassment.

The woman claims the harassment included a male colleague groping her and calling her a ‘slut’.

As a result, she is seeking damages in the Federal Court, claiming management did not stop the conduct after she complained.

The woman joined the company in 2010, and started working at the Melbourne Airport office in 2106.

This is when she alleges the sexual harassment began.

In court documents, the woman alleges the male colleague invaded her personal space by frequently standing very close to her when talking.

Additionally, she alleges the man sometimes put his hands on her shoulders.

The statement of claim also alleges:

“The (colleague) made no attempt to conceal his conduct from other employees.

“The conduct occurred within the presence of other staff members rostered on at various times and in various branches … at the Melbourne Airport.

“The applicant tried to gauge the reaction of other employees to the ­inappropriate conduct, however no other staff commented on it.”

Furthermore, the woman alleges the man groped her during a night shift when rostered on together alone.

“During the shift, the second respondent made unwelcome sexual advances to the applicant and sexually assaulted the applicant,” the statement of claim states.

The woman says she made it clear the sexual advances were not welcome. 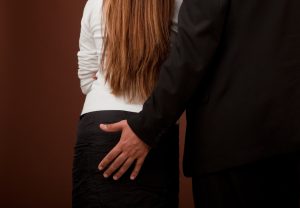 The worker says she reported the man’s inappropriate conduct to a manger, who told her it was “not acceptable”.

As a result, the manager assured the woman she would “have a word with him”.

However, the man’s behaviour towards the woman became angry, according to the court documents.

“In July 2016 the second respondent told the applicant to “f— off” in an aggressive tone.

“In March 2017 the second respondent called the applicant a ‘slut’.”

The woman took annual leave immediately as a result of that incident, and did not return to work.

She claims the harassment has subsequently affected her mental health.

For example, she now suffers depression, anxiety, and a loss of confidence.

“When a worker makes a complaint of sexual harassment, it should be treated extremely seriously by management,” he said.

“It is important to commence an investigation to establish the facts surrounding the allegations.

“And that investigation should involve speaking to all parties, giving any alleged perpetrator/s an opportunity to respond to claims made about their behaviour.”

“If a company mishandles a complaint, they leave themselves wide open to legal action, and risk hefty compensation payouts to victims,” he said.

A real estate agent claims sexual harassment from her colleagues and boss, who allegedly sent…

Three quarters of Australians report experiencing sexual harassment, according to new research by the Human…