A gay pride rainbow flag has been taken down by security during Israel Folau’s first footy match with his new club.

In addition, another fan claims security ordered her to remove a rainbow flag she wore.

A man draped a rainbow flag from one of the spectator stands during the match.

Soon after, a security guard can be seen removing it.

Meanwhile, Alison Grey, who attended the match wearing a rainbow flag, was ordered to take it off. 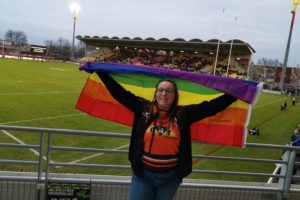 Folau’s new team, the Catalans Dragons, confirmed the orders for rainbow flags to be removed.

The fans were told it is for “health and safety reasons” and because it is “against club policy”.

A Dragons spokesperson confirmed it is looking into the matter and is waiting for a report from security.

“I’m here to talk about football, not about political or religious views or whatever else it may be,” he said.

The Wigan Warriors has announced it is holding its annual pride day on March 22 – the day they play the Dragons.

Pride Day is a way that sporting clubs worldwide show support for the LGBTIQ community.

Folau brings intolerance where ever he goes

“So much for freedom of expression.

“It just goes to prove the greedy money-hungry hypocritical religious bigot Israel Folau brings intolerance where ever he goes.

“The sooner he quits sport, and speaking in public, the better.

“He’s as dumb as he is greedy, and is an awful hate-peddling human being.”

For the record, the Dragons won the match 36 to 18 against the Castleford Tigers.

If you experience discrimination on the basis of your sexuality or gender identity, we can help.