A Muslim worker was fired from her job at a Sydney pharmacy for refusing to remove her hijab while at work.

Bilal Rauf from the Australian National Imams Council made the extraordinary claim at a parliamentary inquiry this week.

Scott Morrison promised the new laws in 2018, but after three years, he has failed to deliver.

Rauf told the inquiry the young pharmacist wanted to wear her traditional headdress while at work.

However, her boss allegedly directed her not to do so, because they feared it would offend residents of the eastern suburbs where the pharmacy was located.

“A female who was a pharmacist, during the course of her employment, decided to wear the hijab,” he said.

“This was at a place in the eastern suburbs and she was told in very clear terms: ‘look, around here, people don’t like this thing, so if you want to wear the hijab that’s a matter for you, but I won’t be able to keep you on here’.”

Rauf said the woman refused to stop wearing her hijab and, as a result, the employer forced her to resign from her position.

“She ended up losing her employment because she had no choice or ability to do anything about that.”

“The truth behind Israel Folau’s latest claim of discrimination”

Religious discrimination unlawful in some states

“In Queensland for example, the 1991 Anti-Discrimination Act prohibits discrimination based on a person’s religious belief or activity,” he said.

“If the Muslim pharmacist worked in that state, she would need to prove that wearing traditional headdress is a requirement of her religious beliefs.” 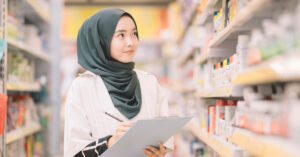 Discrimination based on religious belief or activity is unlawful in some states, but not NSW.

Keysar Trad from the Australian Federation of Islamic Councils told the inquiry that discrimination against Muslim people is rife.

He spoke about an unnamed radio “shock jock” who referred to Islamic people as “vermin”, yet faced no legal consequences as a result.

“We found after a very long process appeals going all the way to the Court of Appeal and going back and forth between the tribunal and the courts, that Muslims don’t have protection,” he said.

“Marshall wants the right of religious schools to discriminate banned”

A licence to discriminate

However, equality advocates say the Religious Discrimination Bill is a licence for people of faith to discriminate against others. Specifically, against single mothers and members of the disabled and LGBTIQ communities.

Equality advocates say the Religious Discrimination Bill favours the rights of religious people over the rights of other groups in the community.

Greens Senator Janet Rice told the inquiry about a number of disturbing incidents of discrimination involving disabled and LGBTIQ people.

For example, a religious medical practitioner who told a patient with HIV that AIDS is “a punishment from God”.

“A (Muslim) taxi driver told a person with a visual impairment that their guide dog was unclean,” Senator Rice told the inquiry.

Mr Heffernan said the proposed legislation will permit religious people to make such comments because they will be considered genuinely held statements of faith.

Solution in search of a problem

He described the proposed Religious Discrimination Bill as “a solution in search of a problem”.

“Currently, religious bodies, including schools, can fire, refuse to hire, or expel LGBTIQ staff and students,” he said.

“Despite Scott Morrison suggesting otherwise, the truth is people of faith already have the freedom to believe whatever they like.

“The proposed legislation is not about ensuring the freedom to hold religious beliefs. Rather, it is about giving people of faith legal cover to express their offensive beliefs and shove them down other people’s throats.

“And if you’re wondering why the government hasn’t been able to pass the legislation after three years – it’s because it’s bad law.

“Yet another dismal legislative failure at the hands of Scott Morrison and former Attorney-General, Christian Porter.”

Senator Janet Rice told the parliamentary inquiry that the Religious Discrimination Bill will allow believers to make hurtful comments to people with disabilities.

In 2018, Morrison said he would remove exemptions from the Sex Discrimination Act that allow religious schools to expel gay students.

“As usual, ‘Scotty from Announcements’ makes an announcement and then fails to deliver,” Mr Heffernan said.

“He has made it clear that protecting vulnerable kids is not a priority.”

The parliamentary inquiry into the Religious Discrimination Bill will continue into the new year.