Neighbours actor Shareena Clanton has copped a barrage of abuse after calling out on-set racism on the long-running soap.

Trolls called her a “whiner” and told her to “kiss her career goodbye”.

Clanton, a Wongatha,Yamatji, Noongar and Gitja woman, said her effort to expose racism has exposed more racism in Australia.

Earlier this week, Clanton said “overt and covert levels of racism were rife” during her time working on Neighbours.

She also said she felt “ostracised and further marginalised” after reporting the behaviour to human resources staff.

“What a token career she had — she can kiss goodbye,” said one post.

Clanton maintains the on-set behaviour she described happened, and furthermore, she said he has documentation to prove it.

“I didn’t even post some of the more triggering/traumatising/vile comments I saw … aimed at me.

“One [in] particular said ‘This is why you don’t employ Aboriginal people, all they do is whinge’.”

“I stand by my truth and what I said I bore witness to and directly endured.” 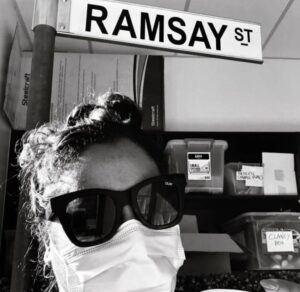 Clanton claims Fremantle Media, the production company that makes Neighbours, had shown no remorse and taken no action on her complaints.

“What do I have to gain here by speaking the truth to one of the most powerful and multi-million dollar global production houses like Fremantle Media,” she asked.

“I’m the one at risk of being blacklisted.”

A spokesperson for Fremantle Media said the company had engaged in “significant and lengthy discussions” with Clanton during her time on the show.

“Our quest is always to continue to grow and develop in this area and we acknowledge that this is an evolving process,” the spokesperson said.

No excuse for racism

Industrial advocate Miles Heffernan from Discrimination Claims says there is no excuse for racism.

“Racism is ugly in any form and it has no place in the Australian community,” he said.

“Treating someone less favourably because of their race or skin colour or ethnic or social origin is discrimination, and it is unlawful.

“The fact that Ms Clanton has received vile abuse after speaking out about this important issue is very disappointing and proves racism is still engrained in Australian society.”

Mr Heffernan said some of the online comments could also amount to unlawful racial vilification.

‘The Simpsons’ producers respond to the problem of Apu

Is it time for Indiana Jones to be played by a woman?

Is it time for Indiana Jones to be played by a woman? As Harrison Ford…