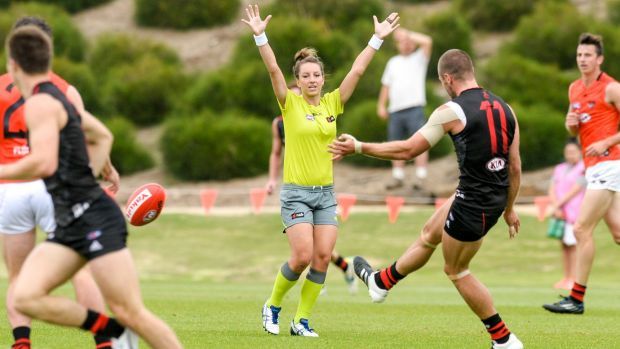 A new academy is fast tracking women AFL umpires in a bid to to dramatically increase numbers.

Several of the umpires have already officiated at AFLW or state league levels.

Women AFL umpires will close gender gap on the field

Russell Davidson, who has previously managed a female field umpire program, will coach the new candidates.

Eleni Glouftsis, the first female field umpire at AFL level, will take up an ambassadorial role with the group.

Despite the growth in popularity of women’s football, in addition to a 15 percent increase in the number of female umpires last year, there remains a big gap in the gender balance.

ALF Women’s boss Nicole Livingstone says the new program will not only train more umpires, it is also a perfect way to encourage women to become involved in the game.

“We’ve seen in the last two years the difference the AFLW is having on women of all ages,” she said.

“You can’t be what you can’t see, and having AFLW in place has provided a role-model situation for girls in footy.”

Livingstone says the program will train female umpires to be the best that they can be.

“They will be picked on their merits and there is no reason a girl who goes through this academy couldn’t end up umpiring an AFL or AFLW grand final one day,” she said.

“This is a really smart move by the AFL because it will attract even more people to their fantastic game,” he said.

“Women are currently umpires in the goal position, but the more we see on the field, the better.

“I can’t wait for the day when we see a female umpire bouncing the ball at the opening of an AFL Grand Final at the MCG – it’s only a matter of time.”

Ms Livingstone added that becoming an umpire offers an alternative way for women to become involved in the sport.

“Not everybody will get to play AFLW, they might not be an elite player,” she said,

“But they might think they can be an elite umpire.”

For specialist help and advice, please call our team at Discrimination Claims today on