A restaurant is being accused of racism, after refusing to allow a black boy to dine because of his outfit.

While staff refused serve to the black boy, they were happy to let a white boy wearing a similar outfit eat at the outlet.

The restaurant owners have apologised as a result of the incident and committed to better staff training.

Marcia Grant took her son to the Ouzo Bay Restaurant in Baltimore.

However, staff refused them entry because of the restaurant’s dress code.

Ms Grant filmed the incident, and can be heard on video saying:

“So we want to eat and they’re telling me my son can’t eat here because there’s no athletic wear.

He’s 9. And there’s kids out there with tennis shoes on.”

Her son can been seen wearing black sneakers, athletic shorts and a T-shirt.

A staff member tells Ms Grant, “Unfortunately, we do have a dress code”.

Then Ms Grant turns the camera to an outdoor eating area and films a white boy dressed the same way as her boy.

When asked about the double standard, the staff member failed to give Ms Grant an adequate explanation.

Ms Grant posted the video on Instagram, and it subsequently went viral.

In the caption below the post, Ms Grant wrote:

“I have faced racism time and time again, but it’s hard AF, when you have to see your child upset because he knows he’s being treated different than a white child!”

“We are sickened by this incident and we sincerely apologise to Marcia Grant, her son and everyone impacted by this painful experience.

Additionally, the company has confirmed it sacked two managers involved in the incident.

And furthermore, the restaurant’s dress code policy has been revised so that children under 12, who are accompanied by an adult, are not subjected to one.

“If this incident happened in Australia, the mother would have had a strong claim for race discrimination,” he said.

“You cannot have one rule for someone, and another for someone else based on the colour of their skin.” 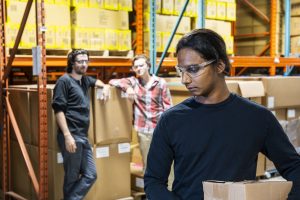 Queenslanders with tattoos call for end to discrimination

Crust pizza in court accused of discriminating against overseas workers

The operators of a Crust Pizza outlet are facing court, accused of discriminating against a…