A teacher has settled a discrimination claim with a Christian school that opposes same-sex marriage.

Rachel Colvin claimed the school’s anti-same-sex marriage position discriminated against her on the basis of her own religious and political beliefs.

Colvin argued her Christian faith and belief in Jesus compelled her to accept gay and lesbian people and marriage equality.

Following the legalisation of same-sex marriage in 2017, Ballarat Christian College amended its Statement of Faith.

The amended Statement of Faith defined marriage as a union between a man and woman, despite the law of the land.

Colvin claimed the school counselled her before forcing her to resign after she refused to sign the amended statement.

She argued it is contrary to her own political and religious beliefs.

In addition, she claimed being denied teaching and professional development opportunities at the school because of her beliefs. 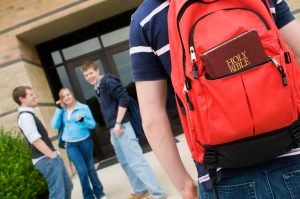 Colvin grew up in an evangelical household in Arizona and once lived as a missionary.

She explains her views on same-sex marriage evolved over time.

She believes same-sex marriage has the same potential as heterosexual marriage to be a reflection of God’s love.

“I am bringing the case to let my LGBTIQ students know that they aren’t deformed or disordered,” she told The Ballarat Courier.

“They are created as they are, in the image of God, and that they are fully loved by God and share equal dignity with all human beings.”

The Australian reports Colvin agreed to a confidential settlement for lost income and damages, in addition to receiving a positive reference from the college.

As a result, the school will not have to amend its discriminatory Statement of Faith.

Principal Ken Nuridin told The Australian the case had “taken an enormous toll” on the school:

“Our College provides a high quality Christian education in accordance with our beliefs.

“The claim has taken an enormous cost in time and resources already – detracting from the ability of a small school like ours to focus on what is important, the education of our students.”

“This case proves that Christian groups want to the right to discriminate based on religion – but only their religion,” he said.

“Ms Colvin has a right to be free from discrimination on the basis of her religious and political views too.

“It just goes to prove Christian groups want more rights than others to discriminate.

“They are a bunch of hate-peddling hypocrites.”