Two Aboriginal women are suing Queensland Rail for race discrimination after they were kicked off a train travelling to Cairns.

The pair claim QR left them stranded in Mackay with little money and little knowledge of the area.

Indigenous elder Donna* told ABC News that she had been travelling from Caboolture to Cairns on the Spirit of Queensland with her grandchildren. Also on the train – fellow passenger Angela Averesch with her three children.

During the journey, the pair reported a male passenger acting strangely around the children. Staff subsequently called police who removed him from the train.

“It was scary, the situation we were put in, my grandchildren could have seriously been hurt,” Donna told ABC News.

However, soon after, they women say a Queensland Rail worker approached them demanding that they stop talking about the incident, telling them to “shut up” and “move on”.

“We were just talking about the trauma that we just went through,” Donna said.

“There was no compassion [from the staff member].”

The staff member alleges the two women then “threatened rail staff”, and as a result, police also removed them from the train.

“I told this woman without raising my voice or swearing, ‘Don’t talk down to us with your white privilege,'” Ms Averesch said.

“And we all got kicked off.”

Stranded a long way from home

The women said QR left them stranded in Mackay, and furthermore, did not allow them to stay at the train station.  Instead, they had to find food and accommodation in the town.

“I didn’t have money, I didn’t know anybody in that area and [was] just left stranded,” Donna said.

“One of the most horrible feelings a person could feel is to be out of control of their own life,” Ms Averesch said.

The women eventually paid for two hotel rooms and bus tickets to get home.

“It was horrible for us, and to think that children were involved, it was just disgusting,” Ms Averesch said.

“I don’t want my children growing up in this country, observing what happened to Donna and knowing that it happened because of what they look like.

“Nobody should have to experience what we experienced.” 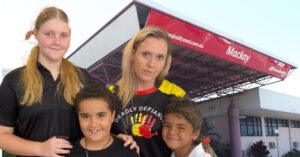 The women have filed a race discrimination complaint in the Queensland Human Rights Commission (QHRC) where the matter is scheduled for mediation.

The women want a public apology, and for QR to mandate cultural competency training, in addition to monetary compensation.

He added that Queensland Rail does not tolerate discrimination.

“You cannot treat somebody differently, or less favourably, because of their race, skin colour or social origin,” he said.

“To prove discrimination, these Aboriginal women will need to show that Queensland Rail staff kicked them off the train while letting other non-Indigenous passengers stay on board.”

The QHRC says race is the second most common discrimination complaint it receives after disability.

If the matter fails to resolve in the QHRC, it will be referred to the Queensland Civil and Administrative Tribunal (QCAT).

A hotel chain has launched an investigation into allegations of race discrimination against Indigenous guests.…