Everyone has the right to live their life free of discrimination and harassment, regardless of who they happen to love.

Discrimination against gay, lesbian, bisexual, and sometimes heterosexual people is unlawful, but unfortunately, it still happens. 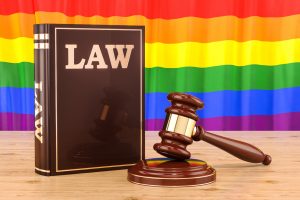 From a national perspective, the Sex Discrimination Act 1984 makes it unlawful to treat people less favourably than another person in a similar situation because of their sexual orientation, gender identity or intersex status.

Same-sex couples are also protected from discrimination under the definition of ‘marital or relationship status’ in the Sex Discrimination Act.

For example, in Queensland, the Anti-Discrimination Act 1991 prohibits sexuality discrimination and vilification.

What is sexuality discrimination?

Sexuality discrimination happens when a person is treated less favourably, or is somehow disadvantaged, because that person has a sexual orientation towards:

A motel owner refuses to rent you and your partner a room for the night because he says he’s religious and “doesn’t want lesbians here”.

Or you are denied a promotion at work, despite being well qualified, because your manager believes that others might feel uncomfortable having a gay man as a boss.

Or you are refused a family health insurance package, despite living in a stable same sex relationship while raising a child from a previous marriage. Where can discrimination happen?

Unlawful discrimination on the basis of your sexuality can happen at work, school or university or TAFE.

It can also happen in a shop, or a cafe, or a restaurant, or when you are looking for accommodation, including renting or buying a property.

Discrimination can also happen when when you apply for credit, or insurance or a loan, or when you are dealing with tradespeople, businesses or state or local government. If you have experienced discrimination on the basis of your sexuality, our team of employment lawyers and industrial advocates at Discrimination Claims can help.

We are specialists at negotiating significant sums of compensation for those who have been subjected to discrimination on the basis of their sexuality.

IMPORTANT:  If you have been dismissed from employment because of your sexuality, you only have 21 days from the date of your dismissal to make a claim, so don’t delay! >>  AFP officer claims discrimination for being in a same-sex relationship

>>  PM urged to protect gay kids and teachers from discrimination